Growing up in the UK I was a long way from the AAC and didn’t get to as many games as I would have liked. So I thought the only option would be to bring the AAC experience to me. After being amazed by the show the Dallas Stars organisation put on I knew I wanted to create something similar at home.

Below you can see pictures of how I created my home cinema / man cave some intro videos and links to the equipment used.

First step, building the raised seating stage. I was moving this set up from a much larger room that allowed me to have 6-7 people come round to watch a movie or a hockey game, so part of moving the man cave to smaller room had to include still being able to fit 6-7 people. To do this I used raised seating, like in a stadium or cinema that back row of seats are higher than the front allowing you to look over the people in front. 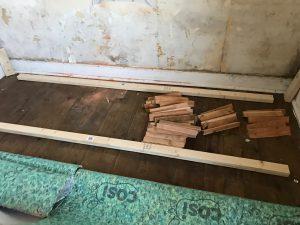 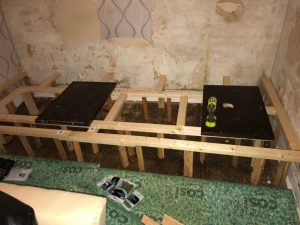 Once the stage was build I fitted one of the two subwoofers under the stage to allow for the bass to really echo and fill the room, it worked amazingly, for movies the whole room was shaking! 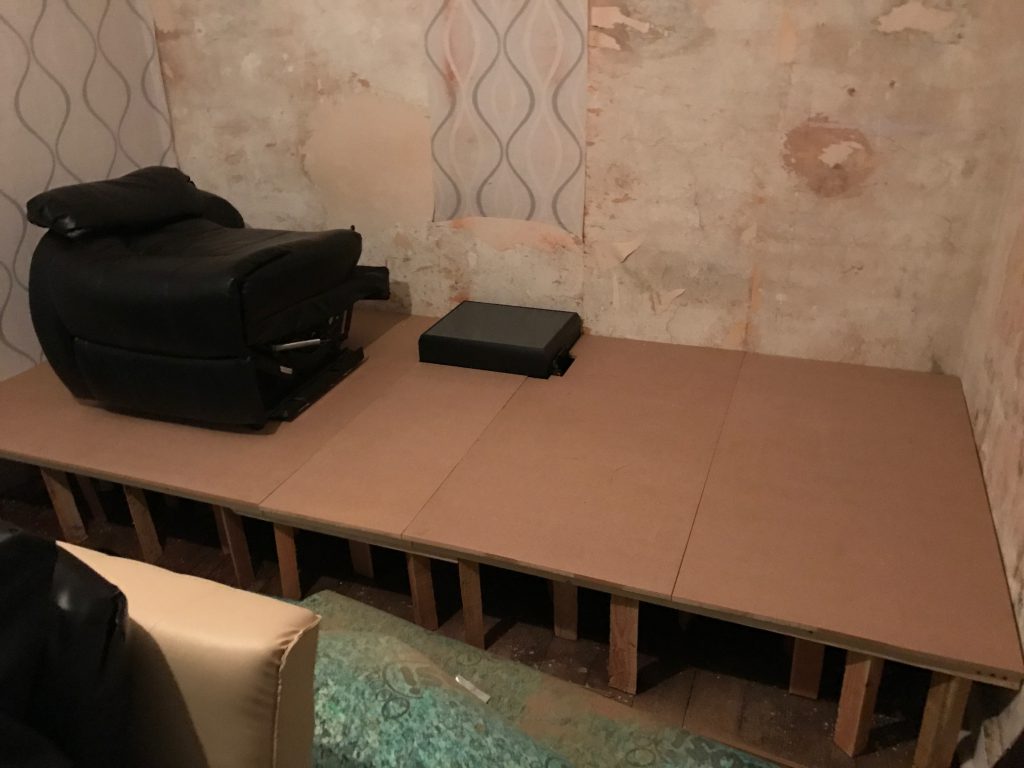 Now I could start measuring the screens & start bringing some equipment in. 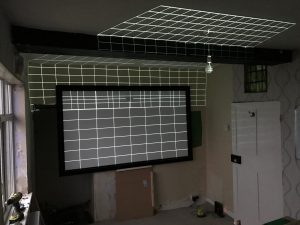 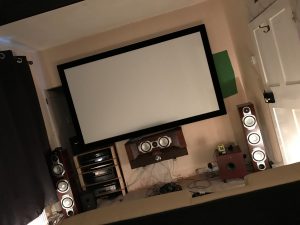 I then added a step to the raised seats to make it easier to access. Then added some lights as they look good and help you find the step in the soon to be blacked out room. 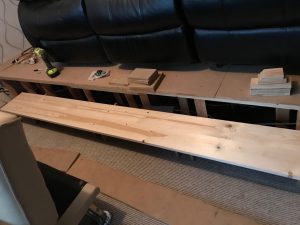 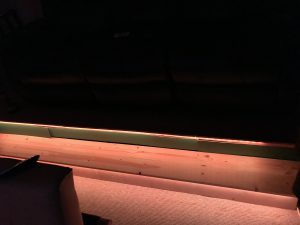 The step lights are linked to the lights at the front of the room. They are all LED strip lights running off a single controller that can be controlled by the Logitech Harmony Ultimate remote.

Next up I fitted the controls for both the main screen and the score board. 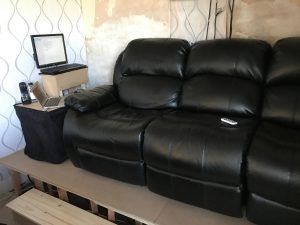 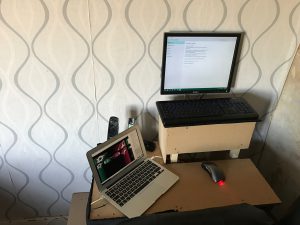 The first use for most of the equipment I had was your normal home cinema setup, so I had:
(links to product or if no longer available a current alternative)

It was a pretty awesome cinema setup.

To create the man cave / American Airlines Centre experience, I added a second projector to display the scoreboard & jumbotron style screen, a MacBook Air to run the scoreboard and videos for the extra screens. I also added a 2 channel DJ mixer to control the audio, but quickly ended up replacing this and just using the volume on the Mac to control the 2nd screens audio, it was easier and took up less space.

Next I finished the room with some black fabric to cover the walls, these are create to act as sound deadening on the walls as stops the sound bouncing all over the place, plus it completely blacks the room out so the projector looks fantastic! I also finished the step in a dark walnut finish. 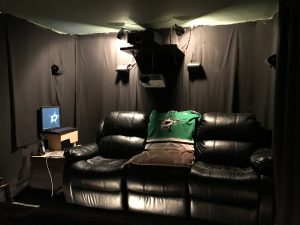 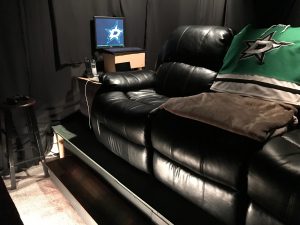 For the second half of the ceiling, victory green was a little too bright, so I opted for an old English steam engine green, it has a kind of matt finish to it and I think worked well for the back of the room where there is no light from the projector. 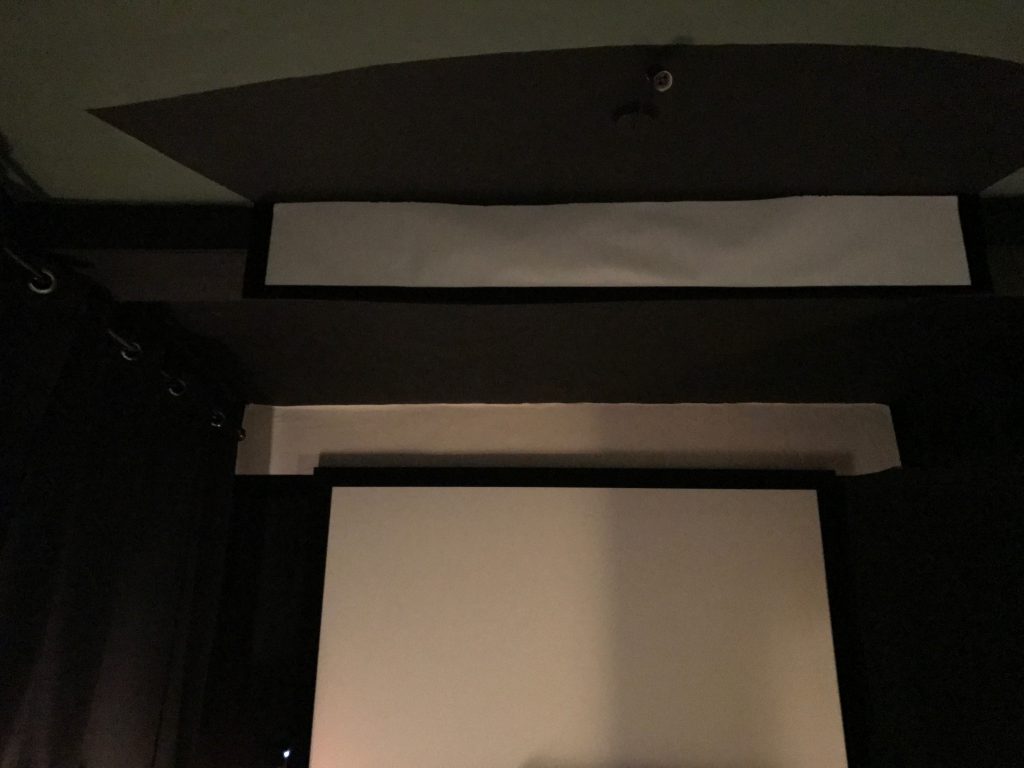 So with the room almost complete, it is looking pretty good. 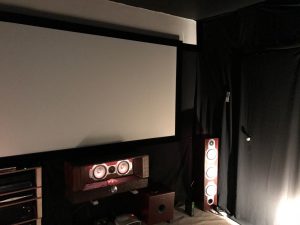 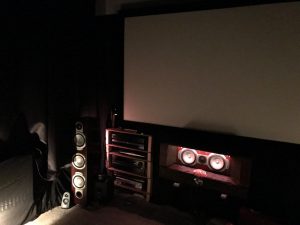 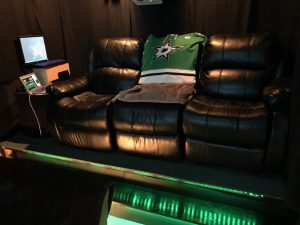 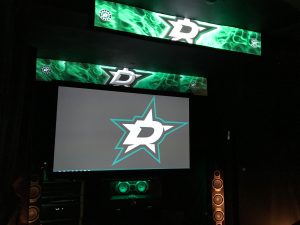 So the below image shows the three screens, the main screen at the bottom a 100″ fixed frame screen is powered by the Optima Themescene 1080p projector, when watching a movie this is the only screen that is on, and is what all the equipment I listed above is linked to.

The screen above and coming off the ceiling are both run by the same Benq w1070 projector, and is only linked up to the MacBook Air. The angle of the projector was key, to allow the screen project perfectly onto each screen. 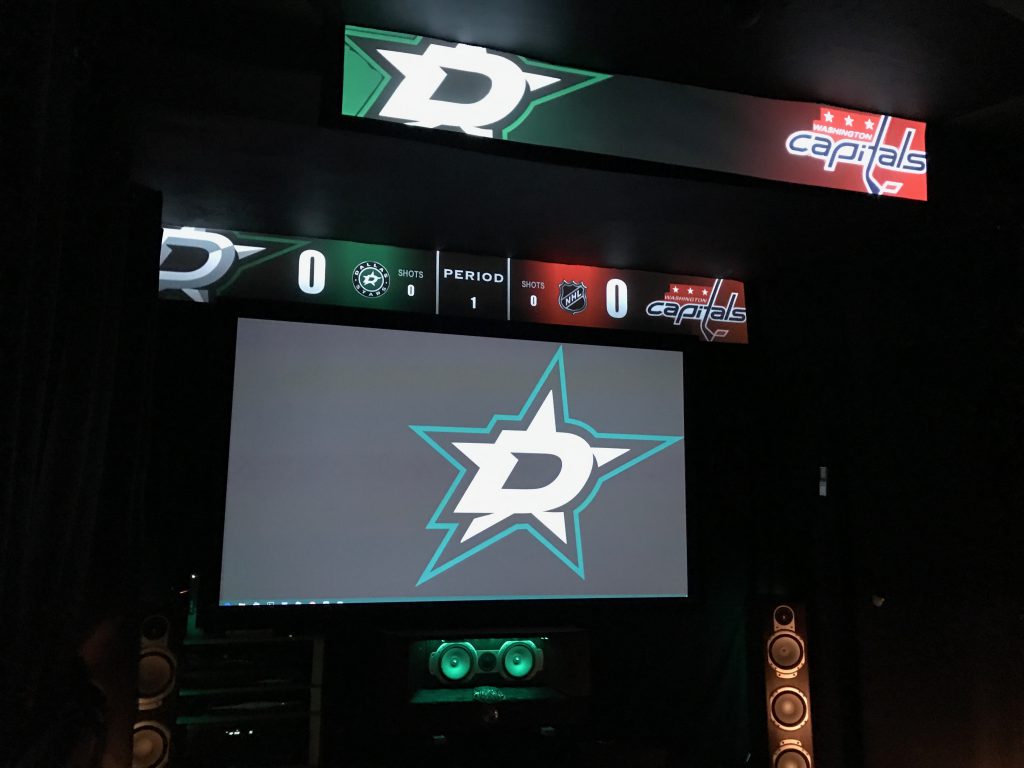 I managed to get everything completed just in time for the 2017 All Star game, unfortunately I spent so much time on the room that I didn’t;t have enough time to create some cool All Star specific content for the projector, but I think it turned out ok. 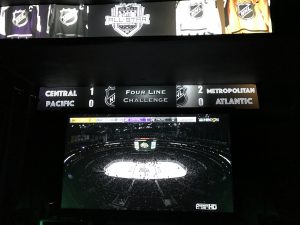 I added some cheap laser lights to the room just to give it an extra boost, it always surprised people when I turned them on, I think they looked pretty cool. 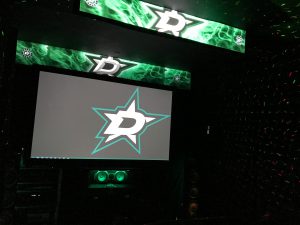 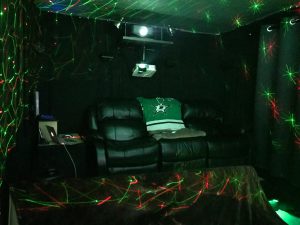 So to finish explaining how it all works, I use the Dell PC to run NHL GameCenter, this allows me to pull my intro, commercial break, and period intermission videos over the ‘Commercial break in progress’ that you get in the UK. These videos are just adverts from the US/UK, some movie trailers and Stars features. I use the second monitor next to the sofa to control what is playing on what screen.

The scoreboard and other screen as I said is powered by the MacBook Air. Again I have created video clips for most things such as when the Stars score, it is a video playing both the goal song, and displaying ‘GOAL’ across both the screens. For other things such as the below ‘STARS WIN’, this is just a GIF I created so it simply scrolls across the top part of the screen, but still allows you to see the scoreboard. I use this for the power play, penalty kill and STARS WIN only, everything else with movement is a video.

So, the scoreboard itself is simple, it is ‘numbers’ or ‘excel’ if you are not familiar with a Mac. I simply created a spreadsheet, created the cells to match the sizes I wanted, filled them in to suit each team, added some images and then a very simple formula for the goals, shots and period to allow me to type the number/info off the screen and it automatically update on the scoreboard. (I hope that sounds as simple as it is…)

Anyway, I am here to answer any questions you may have, I have linked as best as possible all the equipment I used below, there are plenty of other options to suit your budget, so again feel free to ask if you have any questions. If you haven’t already, please check out the videos showing the setup in action, be sure to follow the Dallas Stars Fan Site on YouTube, Facebook & Instagram for all things Dallas Stars! 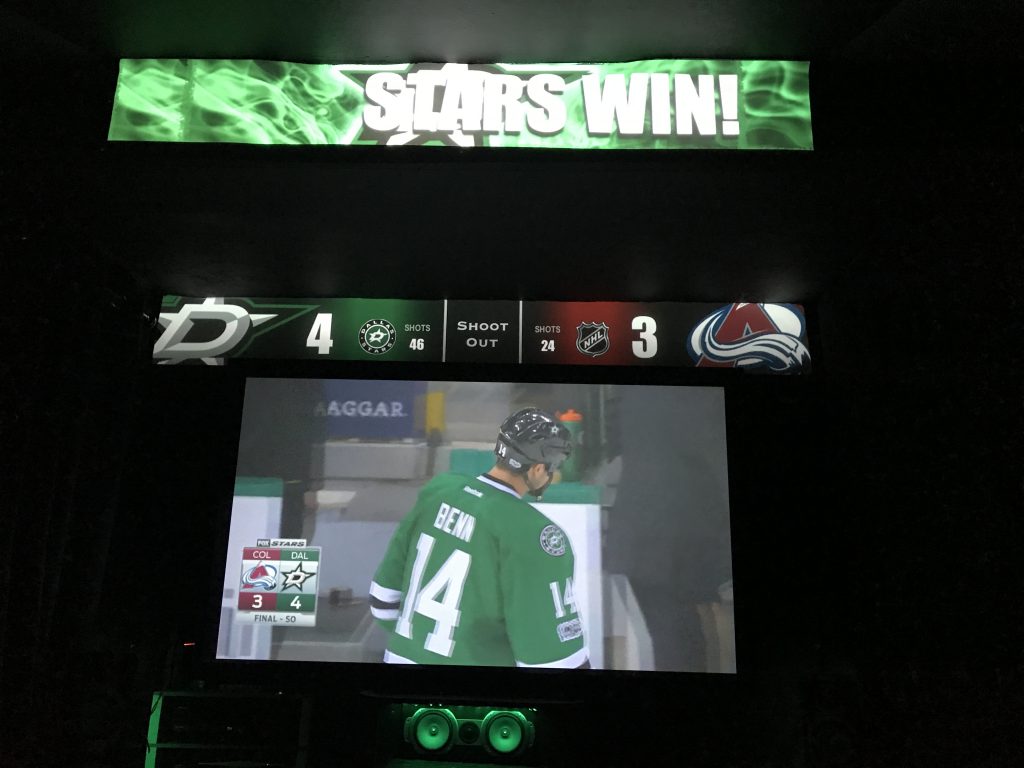