Yes, we are indeed back. With just 9 games left in the season the Dallas Stars Fan Site is ready to return, and what a time to return. 9 key games that will…

It’s game day, round 1 kicks off today as the Dallas Stars and Calgary Flames kick things off in Edmonton.

Also, the Dallas Stars Fan Site returns! We are sorry we have been very quiet since the season was put on hold, but we are back and will be giving you our thoughts on how the Stars perform during the playoffs!

The NHL 2018 Draft lottery awards the Dallas Stars the 13th overall pick in the 2018 Draft that will be held for the first time at the American Airlines Center in Dallas, TX.

The last time the Stars picked 13th overall they added FW: Radek Faksa. The Stars had slim chances of getting a top three pick, so 13th was probably the most realistic outcome.

The full results of the lottery are:

The remaining picks will be announced at a later date.

Tickets for the Draft will be available for Dallas Stars Season Ticket holders from Monday, and will be opened up to all on Monday 7th May.

The Draft takes place in Dallas at the American Airlines Center on June 22nd & 23rd.

The Dallas Stars announced today that forward Tyler Seguin  was named the club’s nominee for the National Hockey League’s King Clancy Memorial Trophy. The award is given annually to the NHL player “who best exemplifies leadership qualities on and off the ice and has made a noteworthy humanitarian contribution in his community.”

As part of the NHL’s Hockey Is For Everyone initiative, Seguin was selected as the club’s ambassador due to his engagement off the ice in humanitarian work which positively impacts a diverse, marginalized or underserved population. The forward used his platform as an NHL player to help diverse groups connect to the game through his work with Seguin Stars and the Dallas Stars Foundation. In his fifth season with Dallas, his work off the ice has benefited such programs as Boys and Girls Club of Collin County, After School All-Stars, Big Brothers Big Sisters and the Southwest Wheelchair Athletic Association.

At select games throughout the 2017-18 campaign, Seguin donated a suite complete with food to various local organizations and met with the attendees after each game. Additionally, he was featured in a public service announcement for United Way of Metropolitan Dallas for their Unite With Troy capital campaign and took part in the Dallas Stars Foundation calendar for the third consecutive season.

On the ice, the native of Brampton, Ont. skated in all 82 regular-season games for the second consecutive season and ranked second on the Stars with 78 points (40-38=78). Seguin finished the season tied for seventh in the NHL with a career-best 40 goals. He became the third player in Dallas Stars history (1993-present) to record 40-or-more goals in a single season, joining Mike Modano (50 goals, 1993-94) and Jamie Benn (41 goals, 2015-16) as the only players to accomplish this feat.

Since the 2013-14 season, his 173 total goals are tied with Pittsburgh’s Sidney Crosby for the second-most among all NHL players, trailing only Washington’s Alex Ovechkin (236).

Where are the Dallas Stars now?

Well here we are, just 4 games to go and we are sitting outside a playoff spot, and we have a couple of teams to jump and several points to gain. It is not where the Dallas Stars Fan Site or the Dallas Stars want to be! 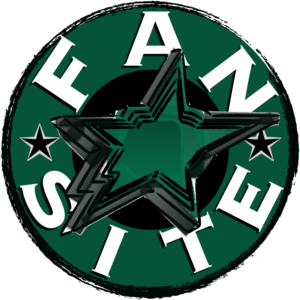 However, with a little luck and good fortune, the Stars can still make it. They will need to string a 4 game winning streak together to end the season, and hope that at least 2 of the teams above them can only pick up a couple of points, but it is times like this when we need to believe, the odds may be small, but both Stars fans and the Dallas Stars themselves need to remain positive and believe that we will make the playoffs.

Our minds are powerful things, if we believe the Stars will make the playoffs, then we will. So Let’s get together when the Stars need us the most and prove to them that we can do this.

The time is right…

In my view, the timing is perfect, we have possibly the best game of the year to come, the final game at the AAC and the great NHL Hall of Famer Mike Modano will be there to kick things off, and we have a chance to put right a tough loss to Minnesota where the Stars out played the Wild but couldn’t come away with a win.

Let’s face it, all the best sports movies add a little drama to make things more interesting, well following the Stars has always been packed full of drama, so let’s make this the best season yet and along with the Dallas Stars Fan Site cheer the Stars on and Let’s get the last 4 wins and get into the playoffs by the skin of our teeth. 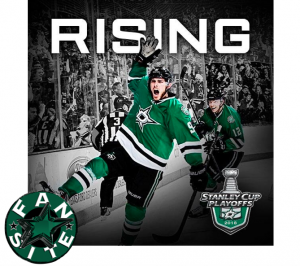 The Dallas Stars Roster has the talent and skill to go far, Hitchcock has tightened up the defense and made so many improvements this year, all the Stars have lost since the end of Feb is the ability to score multiple times a night, they still have the firepower so let’s find the back of the net, get back on a roll and make this happen.

The Dallas Stars are celebrating 25 years in Dallas, the franchise moved to Big D in 1993 and with it, the Stars were born. All season the organization have been celebrating historic moments from the franchises time in Dallas from iconic on ice moments such as the 99 Stanley Cup winning goal by Brett Hull, to off ice moments such as the introduction of Victory Green and trades that stunned the hockey world bringing players like Tyler Seguin to Dallas. It has been 25 emotional years, and this year the Stars are pulling it together to make it another season to remember is making this Dallas Stars Blog grateful to be along for the ride.

The hockey season is not an easy one, as all fans know it is one of the hardest challenges in all professional sport and there is no question the Stanley Cup is the hardest trophy out there to win. But what do we think about the position we are in?

The Dallas Stars had a good but not perfect start to the season, since the new year however they have become one of the top 3 teams in the NHL. With their performances on the ice they have worked the way up the standings to the number three spot in the central, arguably the best division in the NHL right now (All-Star game not taken into account…)

But being in third place in the central is a few wins away from first and a few losses away from being out the playoffs, so why does everyone keep saying the Stars are one of the best teams in the league?

Why the Dallas Stars are in the top 3

I believe this question has a coupe of different answers… It is a tough and close league, especially when you look at the central, but looking purely at the Standings will never tell you exactly how good a team is. Looking at the entire NHL over the last 10 games will give you an entirely different league table than looking over 40, 50 or 60 games for example. However, the standings are what matters at the end of the day. So the fact the Dallas Stars sit in third in the Central Division, 4th in the Western Conference and 8th overall is obviously one of the reasons they are being ranked so highly in so many peoples opinions. When you go through the numbers they are exciting to read and puts a smile on all Dallas fans faces!

And all these numbers are based on all 58 games played, when the Stars didn’t get off to the start that so many expected.

The other reason the Dallas Stars are highly ranked

Well, as I kept saying above, it is a long season and all the stats above are based on the 58 games currently played, so if you have not guessed, the main reason to me why the Stars are looking so good, and it’s also why this Dallas Stars Blog has been so enjoyable lately, is the Stars play of late.

Recently the Dallas Stars have found their game, almost every night they come out and look unstoppable, they control the game and run away with the score regardless of who they are playing.

And it is looking at just the last 20 or so games that in my opinion puts the Stars in the number 2 or 3 spot in the league. And that is pretty damn good! Yes a couple of years ago the Stars had a fantastic season and finished as no1 in the West, however, if we are honest it was a nail biting season, Kari & Anti although both had a great season and had 25 wins each, in the games we lost the defense fell apart and we couldn’t get a save sometimes from either goalie and it was confusing to watch. Then we would watch a game were we headed in to the 3rd with a 3 goal lead and it would end up being a one shot game with too much time on the clock – yes it was fun, but I don’t think any ones heart can take too many seasons like that.

This year, and the Stars current play has them looking like a real, genuine contender, and if I was any of the other 30 teams I would fear playing the Stars, and not for unpredictability, but because you can’t not be afraid of the firepower and work ethic of every forward line, and you will need to find a way through a solid defense and if you do you have Big Ben Bishop or Kari, who has found his game again, to contend with.

What to look for in the Dallas Stars last 24 games

We just need to keep doing what we are doing (Vancouver game excluded…) My view is the absolute best time for a team to find it’s game and to click and reach their potential is right about now! The Stars have already got themselves in a play-off spot, and have a little breathing room. Now they keep playing as they are, keep moving their way up the standings and hopefully have an easier first round contender, but no matter what the Stars will enter the playoffs as one of if not the best team in the league, and that is a nice place to be, regardless of actual overall standings.

We will all remember the LA Kings a few years back making history by being the first 8th seed team to win the cup, well it proves that any team can do it and it’s about finding your game and playing well at this time of year and in the playoffs that will win you a cup. I truly feel good about this year and believe the Stars can do it!

To conclude this Dallas Stars Blog, I think the first thing to do is to give the Dallas Stars a big thumbs up for their work as of late, for us to continue to cheer the Stars on and enjoy watching them play, the whole organization to continue putting a fantastic show on and to congratulate them on how they are allowing us to celebrate 25 years in Texas. As we hear the players say ‘it is a good time to be part of this organization’, well it’s a pretty damn good time to be a Dallas Stars fan!

Thank you, Dallas Stars, keep it up!

Any donation big or small is highly appriciated, it will enable us to grow and bring you bigger and better everything Stars related!